Don’t get me wrong. Even though the title says about party destination, I am not going to touch much on the parties at Phuket. As someone who is introvert, Phuket is a destination which I may not return again. If you are a party goer and love to have a lot of fun, Phuket is definitely a must visit destination. However, if you are seeking for solitude time at the beach, there are many more places across South East Asia that offers less touristy area but I have nothing against Phuket.

Phuket trip is totally unplanned. That is a no go policy for me. Personally, I will at least plan on the timing and what to do. Although some people prefer to go all out without any plans, it is advisable to have a plan in order to avoid any problems. I was quite busy with my work and planning for trips to Western Australia, so I did not focus on Phuket. So, without any expectations, I went to Phuket with my buddy. The airport was quite far from the destination which is at Patong Beach. It took us one hour to reach the hotel and it was quite late at night when we arrived. However, we did still walked out to the infamous Bangla Street to see what the fuss was all about.

I felt under dress with only shorts and tank tops on the way to the street but when I reached there it felt different. It was something more than I expected. It was really surprising how a street could become a party lane. The club and strippers were hanging along the street. It was something I have never experienced before, so it was quite shocking to see something so open. However, I did find it fascinating and I am sure most of the visitors find it the same way too. We did not spend much time there because it was too late and loud and we were very tired from the journey.

I know that if we wanted to go for island hopping tour, we need to book a night in advance or at least wake up early on the next day and hoping that there will be extra opening for those last minute people. But that night, we went straight to hotel and sleep. To make it worse, we woke up quite late, at 8am. Nonetheless, we still browsed for any tour package and we discovered that James Bond Tour (1500 Baht) sounded very promising. I did not want to repeat Phi Phi Island Tour because I had done that before from Ao Nang (Krabi). On the other hand, The Raya Island Tour was a bit too long for just one island with a nice beach (which I have seen many times in Malaysia). Unfortunately, we were late for it and missed the trip. Thankfully, we still had another extra day tomorrow in Phuket so we took the chance and booked the tour from a small vendor near our hotel (Mirage Express Patong).

Now, we ended up clueless on what we should do here. I did not do much research so I did not know what is interesting around Patong during the day. All shops were closed. Thankfully, the beach was only close by. So, we spent the morning soaking in the sun. The beach is sandy and quite wide. Moreover, there were not many people in the morning so it was quite relaxing. Eventually, it got too hot and bored. Somehow, we had to walk back to downtown but the attractions are mostly outside Patong. Renting motorbike was the cheapest option but I am not a good rider. I was worried about the traffic and the road condition. To be safe, we should avoid motorbike at any cost. Using tuk-tuk is another option but the journey would be limited to destinations being set by the vendors. Besides that, the cost was quite high (avoid using tuk-tuk or taxis). I noticed that Ao Nang is definitely way cheaper than Patong. Probably due to high number of western tourists here, the vendors might have marked up the price.

We ended up renting a car near the beach which was about the same price as the tuk-tuk when we split the cost (1300 Baht) among us and driving is definitely better as we had more freedom to explore the island. Firstly, we went to Big Buddha on the hill, located about 1 hour away from Patong. The journey was long including the traffic but the view was fantastic. We passed Karon Beach which was definitely prettier and wider than Patong but it was too hot for us to stop there. We would rather continue driving straight to the Big Buddha. Some tourists were willing to hike up the hill along the road in scorching hot weather. I was impressed but felt grateful at the same time.

When we arrived, there were sufficient parking to park the car and we walked to the stairs which was also not that far from the idol. Since the idol was located on a hill, we could see the view of the town and sea. It was tranquilizing. Big Buddha was rated as number one attraction in Chalong (the town near to Karon Beach). The maintenance work was still ongoing but it did not block the entrance. Downstairs, underneath Buddha statue is the Buddhist temple. In here, you got to see the prayers and rituals up close. There we were, from not knowing what to do, we were now at the first stop. My mood was definitely getting better which had led me to buy coconut ice cream near the temple. It was so refreshing especially in this sunny afternoon.

The next stop was Phuket Old Town, which is about 45 minutes away from Big Buddha. Old Phuket Town looked so much like Georgetown in Penang. There were also many Chinese residing this town. So, the culture was pretty much the same. Most importantly, the colonial style buildings looked exactly the same as Penang. Phuket was a tin mining town during 16th to 20th century before rubber tree plantations become the major economy besides tourism. During the mining period, Chinese from mainland China migrated here to mine the tin. People of Chinese ancestry make up the largest population in Phuket.

It was already noon and we were getting hungrier. It was quite difficult to find Halal food at Old Phuket Town (understandably due to Buddhist population here), so we decided to drive back to Patong where Halal Muslims food were more visible. We stopped at a small restaurant next to the main road and it was a relieved to finally tasted an authentic Southern Thai dishes. I was so happy at that time, I forgot that I was suffering from headache from the heat. We returned to the hotel to take a short nap before driving out again to Kamala Beach. The beach was sort of secluded but there were still many tourists here. The best thing about the beach was the banana pancake and coconut water. They were so good (probably because we were already hungry and I had been looking forward for coconut juice). Banana pancake was quite prominent snack here because there were many small vendors all the way from Karon to Patong and Kamala. If you are a foody like me, you should try the one with Nutella and don’t forget coconut juice to go with it together.

At that night, we walked about 3 kilometers from the hotel to a seafood restaurant where many Malaysians would stop to eat. (I came here because of the recommendations). However, it was one of those night where the service was not that good. They were receiving a bus of guests so we had to wait for 40 minutes for the food to be served. To make it worse, I was already bloating and my stomach was cramped. I had to go to the bathroom immediately in the middle of dinner (that means, I had to walk very fast for 3 kilometers just to relieve myself at the hotel). What a night.

It was finally the day that I had been waiting for. After waiting for quite a long time, the bus arrived at about 930am. The bus brought us to a location 1 hour away from the hotel (Por Pier). It was already broad daylight when we got in the boat. Based on the price we paid, we got to be in a medium size speed boat and a lot of space for us to move around (there were about 15 people on the boat). It felt quite luxurious especially when I saw most of the boats were so big and cramped. I believe those boats come at package at 1800 baht per person. So, we did seal a very good deal. Yay!

We would be stopping at 4 islands. The trip will mostly cover locations at Ao Phang-nga National Park which scene dominated by lime stone formations. If you ever visit Phuket, do not ever miss the chance to go to this National Park. The best way to get here is by booking James Bond Tour. I believe this can also be done from Ao Nang too.

The first stop is Hong Island. We did not check earlier what kind of trip it would be. So, Hong Island had exceeded my initial expectations. There were already small boats with canoes waiting for us. Each canoe was assigned to a local so we did not need to paddle ourselves. We had all time we want to take photos and enjoy the moment. However, it is best if you bring a camera with a stick so that it will be safer. I only used my iphone to take the photo so it was quite nerve wrecking. What if the phone drop into the water. I believe there is no way to retrieve back, given the green murky sea color and the unknown depth.

I believe this is the main attraction for the tour. We were dropped at the island for about 20 minutes just to take a photo overlooking the lime stone. The rock is famous because it was featured in James Bond movie. Maybe if I watch the movie I would appreciate more. 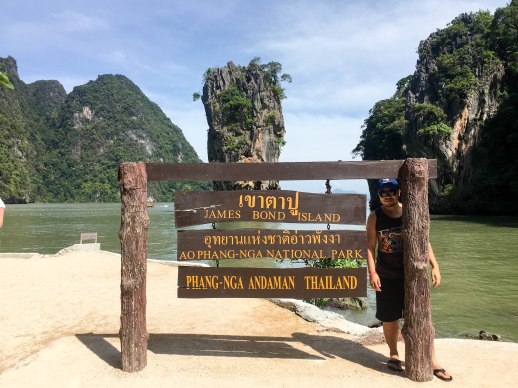 Over here, we went inside a cave. It was a quite a nice experience even though it was very short and slippery. It is not advisable to wear shoes or flip flop because the cave floor is covered with slimy clay which becomes very slippery. I had joined caving before and this cave was pretty relaxing. The end of the cave was the sinkhole which was submerged with a stagnant water.

Approaching lunch time, we were brought to an island with a floating village attached to the limestone hill. It was a village where a mosque could be seen from further away. Thankfully, we were served with local food. I was so hungry. Unfortunately for the westerners, they were having a hard time, so please bring yourself emergency snack just in case if the food is not tasty for you.

The final island is a small island with a beach. The water is crystal clear and there were shades all along the stretch. We were given 1 hour and a half just to chill out and drink coconut juice again. This is the kind of beach that I love.

2 thoughts on “Phuket: A Party Destination”

Translate to your language